A look at National Community Engagement with Chalonne Wilson 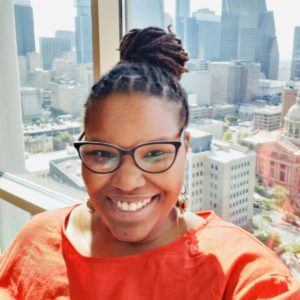 Her national work focuses on the MacArthur Foundation’s Safety and Justice Challenge. This initiative aims to reduce the number of people incarcerated across the US at over 50 sites across the country. After several years of advocacy by NCEI and others, MacArthur is in the early stages of shifting to a community engagement-centered approach, specifically focusing on currently and formerly incarcerated people and their families. As a new member of the team, Chalonne is working with sites to develop and implement community engagement strategies.

Giving community money isn’t as risky as people think. Millions of dollars have already been invested in eliminating disparities between white communities and black, indigenous, people of color communities, to little avail.

“What’s the bigger risk? Continuing to fund things the way we’ve been funding them and getting the same results? It feels more risky to keep doing the same thing. Instead, we need to consider how to actually get money into the hands of communities. How might we allow communities to drive how this funding is spent?”

For example, in Philadelphia, a criminal justice innovation fund has been established to provide microgrants to community-based organizations working on jail reform. Additionally, this site established an community advisory council with a paid staff person and financial resources for advisory members. This would not be possible without the supplemental community engagement funding from the MacArthur Foundation to select Safety and Justice Challenge sites. While people have concerns about what might happen if community, instead of institutions, were given money, the worst case scenario is that issues like mass incarceration stay the same.

What is Energizing about the work?

Chalonne gets life from all of the people doing community engagement, the way they hold events, and how they share space and power. Especially energizing are informal, grassroots spaces that engage individuals and families across generations. Being a part of a family with five living generations, her vision for the future is that families of multiple generations will have more opportunities to be engaged together in their communities.

As much as she wishes that she could “snap my fingers and put an end to the unjust systems,” she knows that it takes work, creativity, and engagement. “We have to usher out this system, and usher a new one in. That will take time and all of us engaging in the changes we want.”

When Chalonne isn’t traveling the country doing community engagement, she works on cooperative initiatives in the North Star Black Cooperative Fellowship, she is a magical and gifted facilitator, and she is a certified IDI consultant and coach. She also enjoys all the laughs, drama and joy of a large and beautiful family.