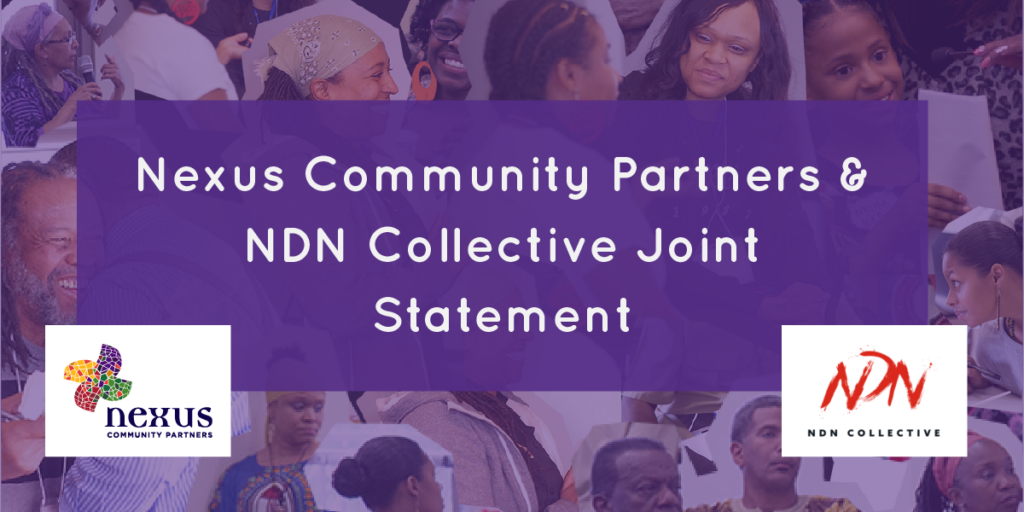 Earlier this year, the Bush Foundation committed $100 million to seed two community trust funds, one Black led and one Indigenous led, to address racialized wealth disparities. As the two organizations chosen for these grants, we find it necessary to speak out in solidarity with one another – and to provide some context and transparency to our communities.

The Bush Foundation didn’t just come to this decision on their own. Their commitment was the result of the massive reckoning that the United States was thrown into after Black people rose up across the country, in outrage over George Floyd’s televised murder by police. The uprisings demanding accountability for continued racial violence created ripple effects in industries and organizations everywhere. Some of those ripples didn’t go far, with corporations simply making shallow statements about valuing Black lives and leaving it at that. In other cases, the momentum is just beginning. The Bush Foundation’s decision to allocate funds specifically for Black and Indigenous-led organizations is a result of the conversation our movements pushed to the forefront of this nation’s consciousness.

To be crystal clear, this decision also didn’t happen as a result of polite conversations and agreements around conference tables. It happened because people took to the streets for months. It happened because we’re demanding the dismantling of the white supremacist systems that are literally killing us.

Historically, Black and Indigenous people have been pitted against each other by our colonizers and oppressors. But we know Indigenous sovereignty and Black liberation are tied to one another. While our people have unique histories and current needs, we are subjected to similar discrimination and violence – and neither of us will be free without the other.

We know that money alone will not fix the deeply entrenched systems led by people who benefit from keeping us isolated from one another and without real power to change the way the world functions around us. The shifting of funding to our communities, however, is a necessary start as we build infrastructure and capacity to lift up our solutions.

Black and Indigenous people have concrete solutions for the issues our own communities face – but those same solutions will benefit everyone else, too.

When Indigenous people demand land back, we’re not trying to steal people’s homes and displace them. We will not repeat the violence and oppression that was used on us. We need land back because the lands that were stolen are sacred to us, and treaties protecting our rights are continuously broken by the very government who created them. We also need our land back so we have space to build sustainable practices and reconnect with our lifeways. Indigenous management of lands is necessary to combat the climate crisis which is polluting the water we all drink, the air we all breathe, and threatening the crops we all rely on for food, so that future generations will have a future.

When Black folks demand reparations, we are asking for a social, political, and economic reckoning for enslavement and the anti-Black policies that followed. Reparations means abandoning the extraction, destruction, and exploitation of white supremacy in favor of life, connection, and wholeness for everyone. Black people have been honoring our shared humanity, practicing cooperation, and caring deeply for one another for hundreds of years. We must live into this future of mutuality and collective care to survive.

The wealth gap was designed on purpose to keep Black and Indigenous people in poverty and therefore out of the halls of power. This grant is a step in the right direction – it’s the casting of a single stone in the pond, and it will stir up the waters a little. But we need much more widespread bold action. We hope that other foundations and philanthropists will follow the Bush Foundation’s lead and make similar commitments to put the money that was made on our backs and stolen from our lands into our hands.

When we talk about alternatives to the current systems, we are talking about building community wealth and regenerative systems that aren’t extractive of people or the planet. When we talk about wealth, we’re asking ourselves: what does wealth mean for us? How do we define wealth, and how is this definition shaped by cultures and values, rather than the market? We know that putting people and the planet over profit is the only way we can reverse the damages our world is currently facing.

Black and Indigenous solidarity means building something new, together with our people. We’re drawing from the past to stage for the future. We have collective visions of liberation guiding us through this next chapter, and look forward to learning together as we move forward.

Comprehensive planning and design will begin immediately in January 2022, which will include input from community partners and advisors. Grantmaking will emerge from that planning process, and is expected to be available to individuals and families by early 2023.