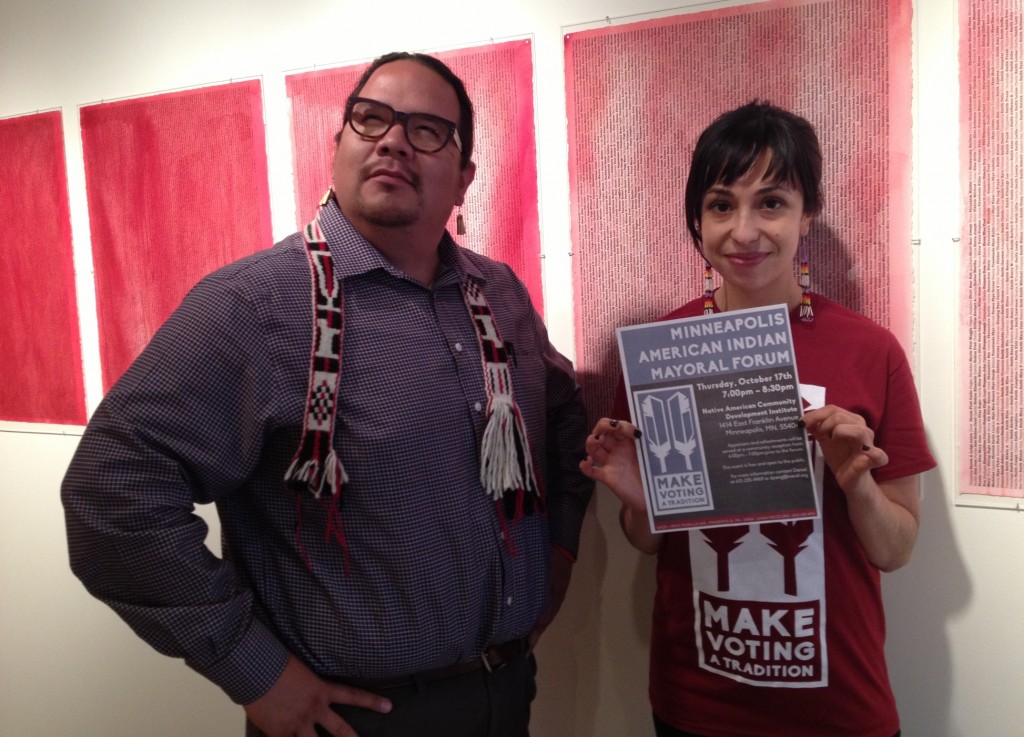 This afternoon, Danielle Mkali of Nexus had the opportunity to listen to Jay Bad Heart Bull, Daniel Yang and Sasha Houston-Brown of the Native American Community Development Institute explain their upcoming Mayoral forum on Thursday, October 17th and their voter engagement efforts.

Why does Minneapolis need and American Indian Mayoral Forum?

Over the past two years NACDI has been doing culturally specific voter engagement efforts. Last year, Daniel Yang as a part of his work with Wellstone Action and a partnership between NACDI and Little Earth of United Tribes launched an overwhelmingly successful voter engagement and registration effort at Little Earth.

This year, NACDI is focusing on the Mayoral election as well as rank choice voter education. Which as Houston-Brown puts it, “whether you have a GED or Phd no one really knows much about rank choice voting.” There will be a rank choice education session at Little Earth on Wednesday, October 30th.

NACDI works to make Native American culture and spirituality a part of their day -to-day work and so it should in elections and voter engagement as well.

“We needed a native specific forum to excite our community and engage in them in the process. We are not only reactive but we will inform and guide the process.” said, Bad Heart Bull.

The idea of having the Mayoral candidates come to Franklin Ave, to NACDI and our community is important, too often the Native community doesn’t see themselves or their communities vision represented in local political forums.  Houston- Brown explained that, “I haven’t heard any (Mayoral) candidates discuss the Native American vision for our community. We are really left out of all of that. We will be exposing candidates, to all of the issues, sovereignty and tribal offices in the city, the assets and challenges of our community. We have one of the largest populations of Urban American Indians in the country. “

The forum plans to focus on issues of sovereignty, health, education and what is on the Minneapolis American Indian community’s hearts and minds.