On Thursday, April 5, 2018, the Nexus Boards and Commissions Leadership Institute (BCLI) graduated 14 fellows from its fifth cohort to a room filled with over 75 friends, family members, nominators, alumni and supporters.

Graduation was hosted in the Paulson Hall at The Swedish American Institute in Minneapolis. Nexus President/CEO Repa Mekha welcomed the group and  summarized the last few cohort’s themes and how they wove into one another on the topic of grounded, deep work in community and relationship building as well as working in systems . The BCLI was honored to be graced by the wisdom and presence of Ramsey County Commissioner Toni Carter, who was the keynote speaker. Commissioner Carter gave a rousing and inspirational testimony about her lengthy road of service in community, expounding on the need for fresh, young and talented minds of color who have the will to serve others and the courage to grab a seat at the table. She reminded everyone of the need to be humble, to 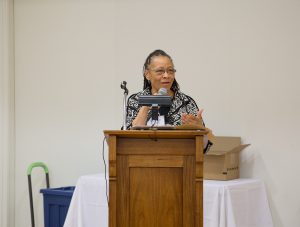 remember your roots, and always be grounded in speaking for those who are not at the table as yourself. Above all, her message of hope, retaining and channeling your passion for organizing and courage was a reminder that we have a long way to go to put more equity champions like BCLI alumni on many more important seats which impact the issues that affect our communities every day. As she said beautifully, “we should not stop at being the first person to do this or the first woman to do that, but that it is never enough to be just one, to have just the first, and we need to help and support each other to build pipelines of leaders to come after us and to push into the work of community and public policy change.”

Commissioner Carter’s words were followed up with comments from two graduating cohort members, Jasmond “Jay” Rathell and Yingya Vang. Jay spoke first, and he highlighted the impact of BCLI being a safe space where people of color (POC) leaders could really learn and dig deep into policy issues together. He found inspiration in the esprit de corps which the BCLI fellowship provided, and announced that he was intending to take his leadership to the next level, and would run for city council in his City of Robbinsdale. Yingya spoke to the importance of strengthening a network of peers and colleagues dedicated to the ongoing work of racial equity, and how motivational it was to be a part of movement to put equity champions at the decision-making tables.

After the speakers, the 14 graduates were acknowledged in the official commencement ceremony and given certificates and stipends for their participation. As in similar years, graduates were gifted with a poster from local artists/organizer/elder Ricardo Levins Morales who spoke at the October 2017 launch of the program.

This current cohort hails mostly from the East Metro, with seven St. Paul residents and a few from eastern suburbs. Fellows came with diverse backgrounds and from across sectors. They ranged in age from 23 to 58, averaging age 35. This year’s fellows had interests in seats at all levels of government from local and regional to state, examples include city budget boards to county health services and state-wide ethnic leadership councils.

The BCLI at Nexus is proud to graduate 14 more alumni into its network of leaders, making a total of 69 Twin Cities BCLI alumni, over half of whom have served at or currently serve in appointed boards and commissions at all levels of government in Minnesota. Stay tuned for more information as the BCLI works to recruit its next and sixth cohort this May.

This program has been adapted from the Boards and Commissions Leadership Institute originally created by Urban Habitat in Oakland, California.