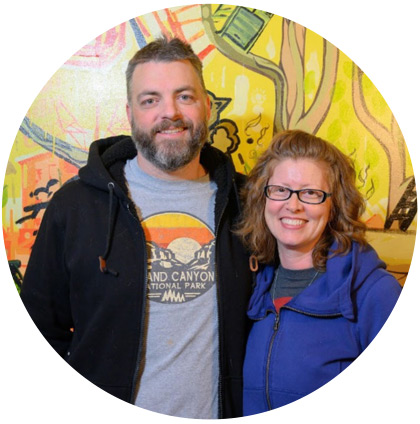 After 20 years of being in management and customer service, Marion Dunbar was frustrated with the negative culture of the corporate world and needed something different. After listening to her concerns on one particular night in 2010, her husband Jesse decided to do something about it. He told her she should start her own cleaning company, and by morning he had bought the rights to Happy Earth Cleaning LLC. This decision led to a successful business with a mission of providing environmentally-safe cleaning with a people-first culture.

In the beginning, Marion was the only staff; she did all the cleaning, management and client cultivation. In 2013, her husband Jesse joined the business. Today, Happy Earth Cleaning has 19 employees.

Happy Earth is “A People Company that Cleans.” Their business philosophy recognizes the intersectionality between a happy planet, happy community, and happy people – employees and customers. Happy Earth stays true to this philosophy by using environmentally friendly products, participating in community events, and offering full-time employment to their staff. They credit their philosophy and culture with the reason they have been able to retain employees and build a strong client base.

Marion always envisioned turning the company into an employee-owned one, and a worker-owned cooperative turned out the be the right vehicle in the end. “Marion actually started talking about employee ownership back when we hired our first employee. I didn’t really understand what a coop was or how it would work at that time,” Jesse explained.

In search of answers, they found the City of Minneapolis Coop Technical Assistance Program (CTAP) and in 2017 they took a nine-week course that helped them understand coop development.

In 2018, Marion and Jesse decided they wanted to move back to their hometown of Seattle, Washington. They realized they would need to create a succession plan.

Potential buyers were approaching them, but they had concerns about selling the business to an outside buyer. Jesse and Marion valued their unique “people first” culture that they had built in an industry that has been known to exploit their workers. They didn’t want the new owner to dismantle their culture.

They decided to send a larger group through the Coop Technical Assistance Program, and this group helped Happy Earth launch the process of selling their business to their employees.

“I think employee ownership is a valuable opportunity to have a democratically controlled workplace allowing for worker control over growth, wages and benefits that directly affect employees.”

Marion and Jesse had a lot of questions about how the employee ownership transition process would work. How could the employees get the capital to purchase the business? How could they continue to run a business while establishing a new cooperative business model?

Nexus Community Partners and Project Equity reached out to Marion and Jesse to introduce their business transition services. The team was able to provide the answers and guidance they were seeking about the future of Happy Earth.

Happy Earth entered into the feasibility process with Project Equity with the help of a $5,000 grant from CTAP. For the next nine months, Project Equity and Nexus worked with Jesse, Marion and interested staff to transition the business into a worker-owned cooperative.

Zach Dennis is Happy Earth’s Dispatcher. He has been serving on the cooperative development team with four of his colleagues. He shared, “I think employee ownership is a valuable opportunity to have a democratically controlled workplace allowing for worker control over growth, wages and benefits that directly affect employees.”

The transition was completed in December of 2019, with 5 staff members initially becoming employee-owners with a potential for more in the future. Nexus and Project Equity will continue to provide technical assistance post-transition.

Jesse shared his confidence about the transition, “Since day one, our goal has been to provide a workplace that respects the employees and provides them with a place they can grow. Knowing the team has hands-on support after our departure gives us the confidence to know we are doing the right thing for the employees and ourselves.”

You don’t have to choose between people and profits.

I’m an owner
I’m an employee