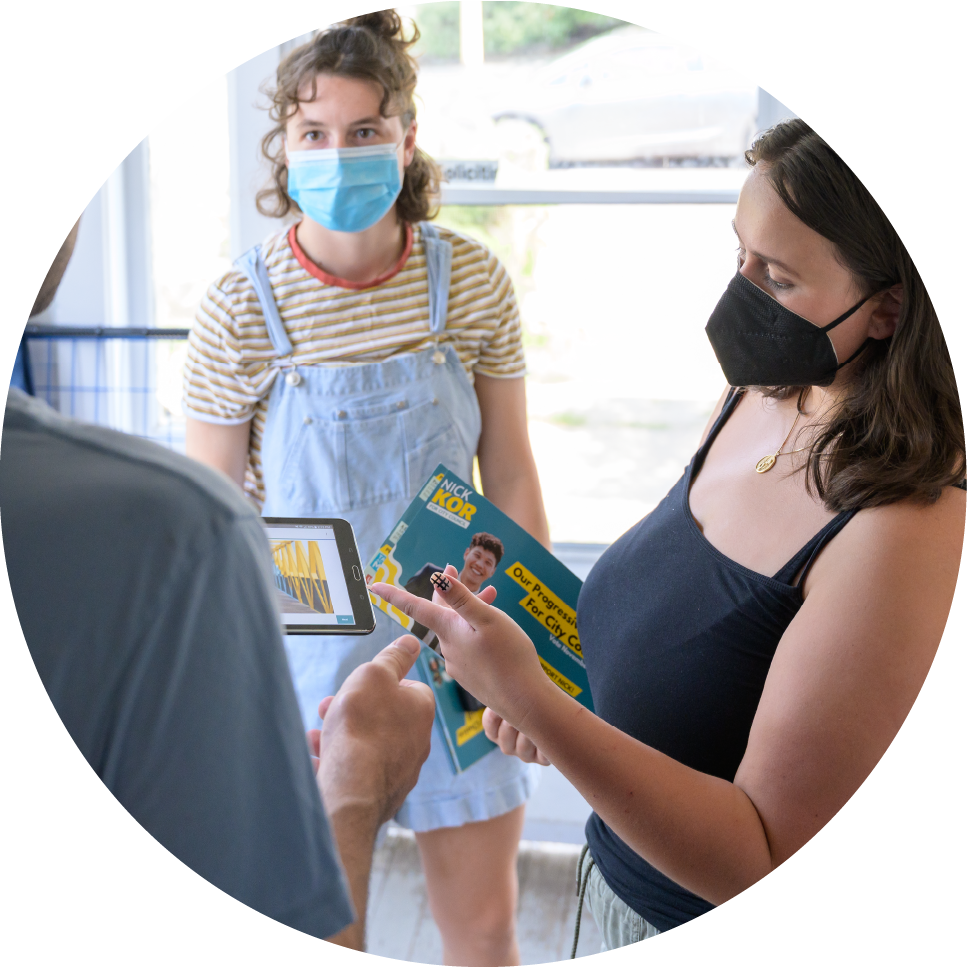 The People’s Canvass (TPC) originally started as Knock Knock LLC in 2019, co-founded by Austin Blanch and Brandon Schorsch. The company’s first work was being a dedicated field canvass team for a MN state representative’s election campaign. In 2020 they participated in a groundbreaking Deep Canvass experiment on behalf of Take Action MN. They quickly branched out and started supporting movement work and other campaigns across the Twin Cities. In the process they built the largest deep canvass in history, delivering success and demonstrating the effectiveness of the technique at scale.

They reimagined the statewide standard for canvasser pay by starting every new canvasser at $20 an hour. By paying a living wage they were able to retain the most skilled canvassers to achieve their goal of being the most effective canvassing in the state. The organization was created to professionalize Minnesota canvassing and offer political campaigns access to highly trained canvasser teams, while upholding living wages and good conditions for workers.

Two years after launching Knock Knock they had accomplished significant growth, sometimes nearing 100 employees. However, the company continued to face a common problem of campaign work. After months spent recruiting and training a dedicated team of canvassers, the project’s end meant our hard-won people power was forced to disband and scatter to find new work.

Austin began looking for ways to get employees more invested in the longterm sustainability of the business. He had heard about worker co-ops before, but wanted to learn more. He reached out to the Nexus Worker Ownership Initiative, a program that specializes in helping businesses transition to employee ownership.

After working with Nexus and Project Equity to complete a feasibility study on becoming a worker co-op, it was decided. “We are transforming canvassing into a more sustainable and community-based model,” said Austin Blanch, “Relational organizing is about engaging the same folks long-term to create lasting change, and that same long-term dynamic is important in building a workplace.  We are moving away from top-down hierarchy in every part of our organization, creating something fundamentally new in our workplace and our community.”

The new cooperative would be called The People’s Canvass.

“Many of us at TPC are deeply bought-in due to our direct experience, and this organization shows us we are valued by making us co-owners. Becoming an owner will allow me to continue this work while building a sustainable future for myself and my community.”

The initial feasibility study provided a head start for the transition phase, the final stage of a conversion. This study consisted of a financial analysis and draft governance model that provided the framework for the final deal negotiation and co-op formation.

The transition phase involved multiple work streams, with both the owner and employees being engaged at various points.

Management transition planning was one component. Austin, who was by then the sole-owner of Knock Knock, was staying onboard as a co-owner. However, with a baby on the way, and more involvement from staff, new organizational structures were needed to carry the workload. Sociocracy was being incorporated into the business at the same time.

Co-op design and incorporation was another workstream. An employee transition team was formed and, with facilitation and education provided by Nexus, they helped design the governance structure that would be used in the new co-op.

Once the plan was largely complete, legal and tax professionals were brought in to oversee the conversion of the LLC. On January 1, of 2022 the co-op seated its first Board of Directors and began operations as an employee-owned company, The People’s Canvass.

You don’t have to choose between people and profits.

I’m an owner
I’m an employee