As Annelise prepares to leave Nexus, read her journey from the beginning

Annelise’s Nexus journey began summer 2016, when she joined the staff as a New Sector Alliance intern. She worked on Metro Transit’s Better Bus Stops Project, handling project coordination and reporting around bus stop accessibility and revitalization. During her work with Nexus on the project, Annelise had a realization.

“It was my first experience in programming, and I realized, I loved my job and I loved Nexus. From there, I wanted to learn Nexus’ operations, communications, development — literally everything about the organization,” Annelise said. 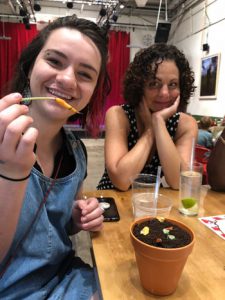 She continued to work at Nexus throughout her senior year and when Annelise graduated in May 2017, she had a job waiting for her; however, mental health challenges had her in and out of the office and she was eventually hospitalized. Despite this, Nexus supported her.

“I was told, ‘don’t worry about Nexus. Your job will be here. We just care about you.’ I felt like I could be authentically myself in a professional environment. Never before did I feel comfortable telling a supervisor I was being hospitalized, and here I was — bringing my full self to this space and being vulnerable,” she said.

When she returned, she was accepted with open arms — and a new job title: Program and Operations Associate. In this role, she focused more on development, grantmaking, and communications. While molding her professional career, Annelise felt herself transforming and growing personally.

“I did more growing at Nexus in two years, than I did in my four years of college — and I didn’t have to pay $40,000. I’ve learned to communicate my love for my work and my coworkers. I know what it feels like to be nourished and cared for. I am a damn fool for leaving because I don’t know if I’ll ever work at another place that makes me feel so good.”

So what’s next for Annelise?

She’s off to Boston to become a Jewish Organizing Institute and Network (JOIN) for Justice fellow. As a fellow, she will continue to explore her role in racial equity work, participate in community organizing, and develop strategies for wealth distribution. Though she’s preparing to work on the east coast, Annelise is keeping her Nexus experience close.

“It’s so weird being in your 20s and you hear everyone talking about how they hate their job. But after being at Nexus, I know it is possible to be in an environment where you love what you do and do it well.”